There have been 11,000 marriages as a result of people meeting on eHarmony Australia since its launch in 2007. So how does the company help to bring couples together? The business has three psychologists and three computer scientists in its data science team to work on the matchmaking process for the United States, Australia and United Kingdom sites, eHarmony US senior research and development analyst, Jonathan Beber, told CIO Australia.

These personality factors include openness, conscientious, neuroticism and agreeableness. “The second stage of matching is what we call affinity matching. This searches through [members] to find out who you are going to be most attracted to and who you will want to talk to out of that list of compatible matches,” he said.

eHarmony's information from US, Australia and UK

Information is collected from members on eHarmony sites in the US, Australia and the UK for matchmaking data analysis. It collects data that indicates when a user looks at a profile, for example, and if that user sent a person a message and the response from the potential match. “That data is used to predict how likely a user will communicate to someone in general as well as how likely communication will occur between a user and a particular compatible person that we deliver to the person as a match,” Beber said. 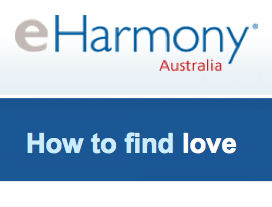 However, he was quick to add that the analysis is done at an abstract level. “No one in the company can easily look at the information and say, 'Aha, that guy is in a relationship now. We can stop sending him emails'.”

Once couples have met on eHarmony and left the website, the company’s analysis does not end. In the US, it conducts a Longitudinal Study of Marriage, which looks at how relationship satisfaction changes from the time of marriage through to the two-year anniversary.

eHarmony US vice president of matching Steve Carter said it recruits couples into the study at the time of their engagement. “We follow them [couples] for a couple of years to see if similarities in personality will predict relationship satisfaction over time as well.”

In a Longitudinal Study from 2012, eHarmony sampled approximately 20,000 married individuals in the US and asked how they met their spouse. About one fifth of the marriages had started from online dating. “The attitude to online dating has definitely changed a lot in the last 14 years since eHarmony launched in the US,” said Carter. “When online dating started in the late 1990s, it was mostly done in chat rooms and people thought it was an act of desperation. Now, people see online dating as a viable option of meeting people who they wouldn’t meet in their everyday life.”

eHarmony has not yet conducted a Longitudinal Study in Australia due to the financial feasibility. According to Carter, it needs to get a sizeable sample of couples who married after meeting on eHarmony Australia and compare this with Australians who got married through other avenues. “When we get that [marriage] data, this would give us an idea of what the relative numbers would be compared to the general population. We may be able to do that [Australian] study in the next five months,” Carter said.